Salads are simple, honest, very tasty and with lots of variety.... Read more

Belgian eating habits are usually described as ‘Burgundian’. The Belgians are said to love food, and eat plenty of it. Chips are regarded as a Belgian invention and in many other countries you can enjoy ‘Belgian frites with or without mayonaise’. Belgian beer is also renowned the world over. Jupiter, Leffe, Duvel and Palm are a few examples of the enormous range of diverse and speciality beers that are brewed in Belgium. As far as vegetables are concerned, lettuce is very popular in Belgium. Typical in Belgian cuisine is the use of regional and seasonal based products, which results in quite large differences and variations in a relatively small country. Belgian cuisine for example would not be the same without chicory and asparagus. These products have a long culinary history. The asparagus season starts in the month of April but ends exactly on June 21.

Preheat the oven to 200gr. C/400gr. F/gas 6. Cut the chicory heads lengthwise in two. Put an ovenproof non-stick frying pan on low heat, add butter and sugar and let, while stirring continuously, caramelize a little. Transfer the chicory halves to the pan and toss and turn until they’re covered with caramel. Press a sprig of thyme in the sliced side of each chicory half, turn them around and let them bake on low heat for 5 minutes. Cut the slices of puff pastry in rectangles, approximately the size of the chicory. Sprinkle some grated cheese on the chicory and lay a slice of puff pastry on top. Fold and mould the puff pastry in the shape of the chicory, it should be completely covered. Place the pan in the oven and let them bake for 15-20 minutes. Let cool off a bit before turning, transfer them on plates and serve with a good twist of freshly ground black pepper.

What else: Ovenproof non-stick frying pan or oven dish 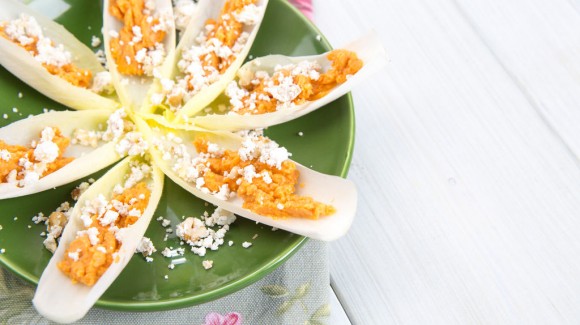 Witlof with hummus and goat's cheese 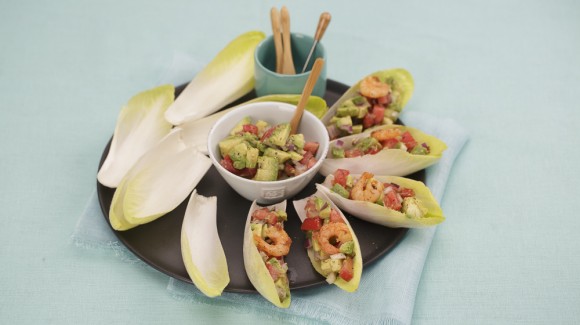 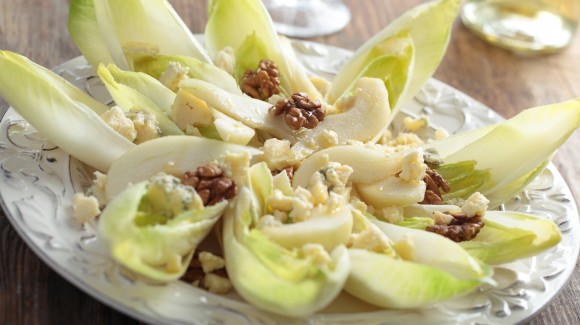