Chicory is a leafy vegetable that is part of the Endive family, and is also commonly referred to as witlof.

What is considered to be a very unique vegetable, also in the way it's produced, it's all about the flavour.  Traditionally it is bitter, as is considered most endive vegetables, but partners extremly well with sweet fruit, vegetables and dressings, as well as robust cheeses. The head of chicory can be eaten raw, but mostly is baked, grilled or blanched.

Certain species are now inherently wild across most of the world, as blue flowering leafy perennials.  Interestingly, the root produced in the first season can be baked, dried and ground, and was used as a substitute for coffee, or the root together with foliage used for livestock fodder.

Typically, preparing chicory can be somewhat similar to cabbage. Remove the outer leaf or two, slice in half length ways and give a good, thorough wash. Individual leaves can be seperated to use whole on their own, halves can be used as is, or slice up the head finely to add to many dishes.

Only buy chicory that looks firm, that is clean and beautifully white.  Any damage will show in signs of browning. Also pay attention to its size, depending on the dish, you should allow 2-3 heads per person, or for as many leaves necessary for use in appertisers.

Chicory ideally should be stored in a paper bag, where in the refrigerator, should last about a week.

As perculiar as the chicory looks, it can actually be quite versatile, adding a new dimension in taste and texture to cooking. 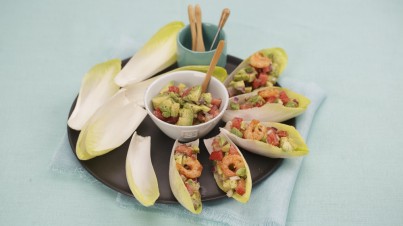 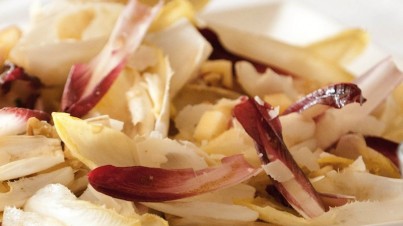 Witlof salad with apple and walnuts