In Western Europe cucumbers are usually eaten raw. In Asian countries they are often prepared in the wok. An Asian cucumber has a prickly skin and the consistency is nore firm. It is therefore... Read more

I’ve been a fan of Chinese cuisine ever since visiting China almost three years ago. I’m also increasingly getting the hang of experimenting with authentic Chinese flavours and inventing my own take on them. But I don’t mean dishes like chop suey and egg foo young that Chinese takeaways have adapted to suit Western tastes, but the spicy and flavoursome food they really eat in China.

By the way, I used to love chop suey as a child, preferably with huge prawns in it. One thing that used to strike me was that the chef had also added cucumber as one of the many vegetables. I always thought that was a little weird. Cucumber was supposed to be eaten cold, wasn’t it – in a salad, or sliced in a sandwich? Nowadays, I’m more open-minded about food and flavour combinations. If you ask me, that kind of tunnel vision belongs in the past. Nowadays, anything goes and you can combine any ingredients you wish – or almost any, ha ha. For example, I recently dined at the Michelin-starred Restaurant O&O, which has Chinese roots. I ordered Singapore lobster as my main, and it was absolutely delicious. You might expect it to be paired with white wine, but the sommelier served us a chilled red Rioja instead. So as I said, anything goes.

That’s why I’m extra delighted to have been asked by Love my Salad to think up some recipes using their very own wok cucumbers. Thanks to their lower moisture content, the cucumbers are ideal for inclusion in hot dishes. I tried them out in this recipe for Szechuan chicken with flattened wok cucumber. The chicken thighs are fried in a mixture of chili pepper, ginger, garlic and Szechuan peppercorns – so it’s not for the faint-hearted! The peppercorns taste fragrant but can make your tongue tingle a little bit, so you should always eat them in something rather than on their own, and don’t be too heavy-handed ;-). You have to experience it for yourself to understand what I mean.

I flatten the wok cucumbers by bashing them with the side of my knife. That sounds a little violent, and I guess it is in a way! But once you taste the difference, you’ll understand the reason why. After flattening the cucumber, you add it to the chicken and continue stir-frying for a few more minutes. Season to taste with the soy sauce, then garnish generously with spring onion and serve with rice noodles. Believe me, you’re in for an amazing taste sensation. I think we can safely say that this wok cucumber is a resounding success! 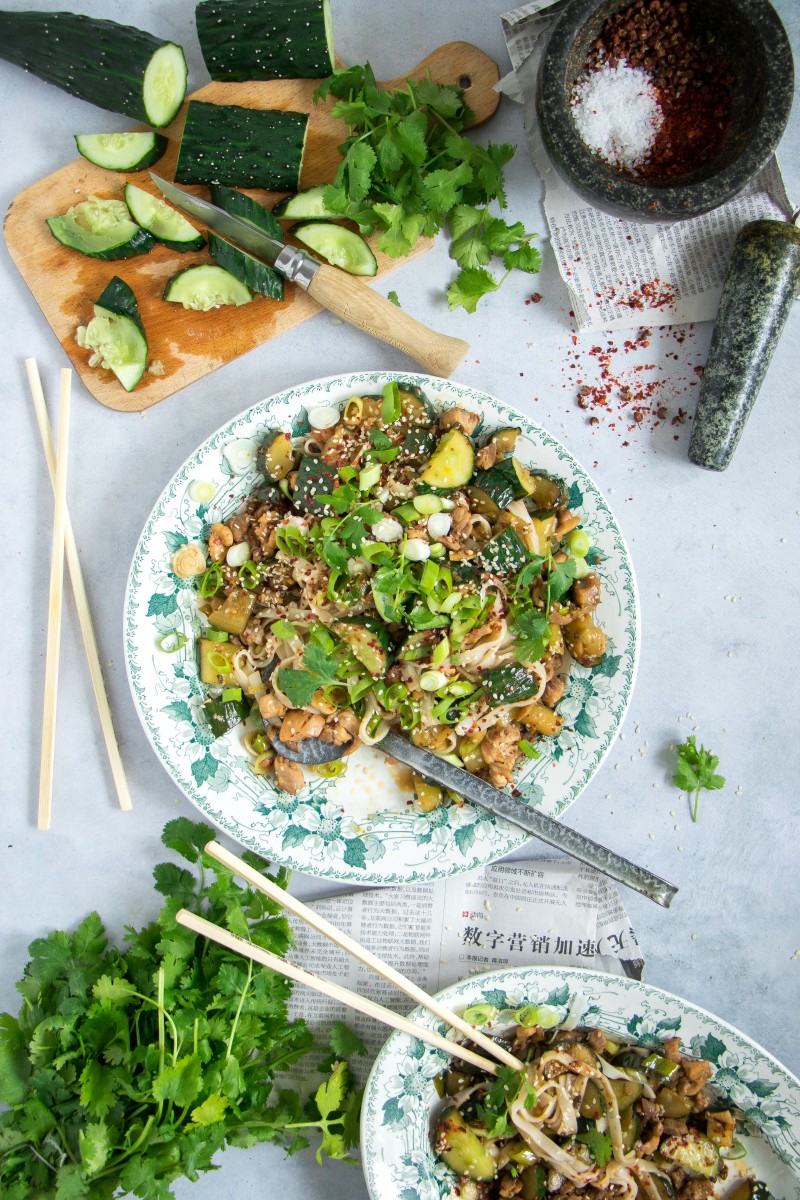