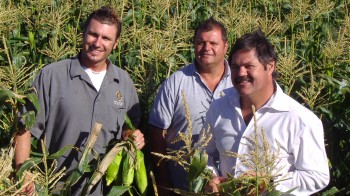 I love the taste of salads. They’re not heavy. I live in Western Australia where salads are grown and I know they’re good!

'We are always striving for innovation, sustainability and environmentally friendly farming.  Consumers want to have fresh sweet corn and stringless beans all year round so we grow eight months of the year in Wanneroo and Gingin, and four months on 200 hectares at Shelamar station,’ said Jim.

Jim’s father, Nick Trandos, migrated from Northern Greece Macedonia to Australia at the age of 15 with his mother and brother Steven to join Nick’s father who had had migrated 11 years earlier to start a market garden.  ‘I love the farm.  It has allowed our family to grow together and stay together in a happy environment.  My brothers Steven and Harry, my wife Sophie, daughters Dixie and Tania, sons Jim and Arthur, have always supported me and I am grateful for this life we share together,’ said Nick.  Jim, Arthur, and Michael took over Trandos Farms in 1998.  Michael's sister Dianne Matthews also works in the business, looking after finances.

In 2012, Jim was awarded the AUSVEG Australian Grower of the Year award and he acknowledged his whole family as the success drivers responsible for the business’ achievements.

Jim’s father is also considered a stalwart of the industry, elected as Councillor of the Wanneroo Shire, then Shire President, followed by Mayor, President of the Western Australian Market Gardeners Association in 1975 and later became the President of the Australian Vegetable Growers Federation.  In recognition of his service, Nick was awarded the Order of Australia and inducted into the Agricultural Hall of Fame.