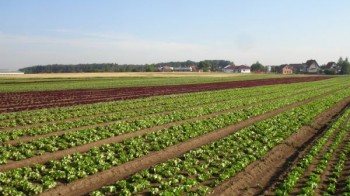 In April 2008 the G’s Group Holdings CZ s.r.o. was founded and is made up of businesses operating in agricultural production, fresh produce and sales. In the same year the company Pascual Polabí s.r.o. which operates in the field of horticultural production became part of the group. Pascual Polabí s.r.o. itself was founded in 2006 by Ing. Tomáš Valtr in cooperation with the Spanish company PASCUAL HERMANOS (located in the province of Murcia).

Since its beginnings, Pascual Polabí s.r.o. has been engaged in the cultivation of leaf vegetables, mostly various types of lettuce. It gradually increased its cultivated area, and with it production volume. For the moment lettuce production is planned on a total area of 320 ha.

Of the varieties cultivated, the main crop is iceberg lettuce, which will this year be cultivated on a total area of 230 ha (more than 70% of the total area). Other leafy lettuce grown are:

• celery and some baby lettuce varieties are also grown.

All lettuce varieties are grown only from young plants in a soil block. The young plants are planted from mid March until around 20 August. This season a total of around 16 million young plants will be planted, meaning that each day roughly 110 thousand young plants must be planted. Our weather conditions mean that harvesting usually begins in the second week of May and ends during October. One harvest requires a group of 16 workers and final preparations for market are also made right on the field. Harvested salads are then cooled in a vacuum cooler (at a temperature of 3-4°C) and finally sold via G´s Marketing CZ s.r.o..

G´s Marketing Central Europe s.r.o. itself was founded in December 2001 as an organisation dealing with sales. It currently takes care of the distribution of all vegetable products of the businesses incorporated in the holding. In particular, it deals with the sales of Pascual Polabí s.r.o. products (various types of leafy vegetable and particularly salads). From November to May, the company handles products imported from our Spanish and English partners.

The majority of products sold go to chain stores operating in the Czech Republic, Slovakia and Poland. In recent years, attempts have been made to extend the company’s operations to other, mainly Central European countries.