It’s 10 April and we’re standing on the edge of the Russian village of Zvizzchi, the taxi can’t go any further because the roads are bad and the snow is piled up in drifts. But, despite everything, Nature is gently awakening from hibernation.

We can see meltwater and, in front of us, an adult fox crosses the road in the dusky twilight. I let out a yell, but Olga Gartman – from ACM – looks up too late from her smart phone. Olga is the manager. Without her, I can’t work here, because I speak barely five words of Russian. But even Olga is learning new Russian words, such as the names of certain ploughs, harrows and other farming implements. We had our first meeting about our experimental vegetable field in a Moscow café at the start of the week. We made the acquaintance of Arkadiy, a knowledgeable and enthusiastic agronomist who knows the region around Kaluga well and will coach us this summer in how to grow the new varieties of vegetables in the local soil. We decided he would come to the village at the end of April.

As we get stuck into the meal that was waiting for us in the village pub we joke about the biceps you get from clearing snow.  Everybody agrees: “Far too much snow has been cleared this winter!” Then it’s time to get out the art plans. In the parcel of books that I sent to Zvizzchi last November there was also a DVD of short films about how items are produced for the International Village Shop. They want to hear more about it. Together we look at a large screen, at the farm where I grew up, which is now a horse milkery. We watch ladies in Southern Germany making Höfer goods sitting at the kitchen table.

It’s good to be back in Zvizzchi, working out the plans with the people I got to know last summer. Where should the vegetable field be located? What’s the best place for the “Made In Zvizzchi” point of sale? Who’s going to build the shop? Who will look after the vegetable field? Meantime the snow is melting rapidly and there are rumours of swelling floodwater and unexpected rises in the water level in the River Ugra.

But things aren’t that bad after all. The whole village is green and slushy and the road to Nikola-Lenivetz is only briefly flooded. Last year’s autumn leaves surface from under the snow, are gathered into a heap, and set alight. They smoulder and emit clouds of smoke. For a whole week you can smell the smoking debris from the year before. “The Russians like a good fire”, says Maria.

The neighbours have given their approval, so it’s now certain that the field will be beside the school. The tractor and the machinery need to be organised and, on the way to the meeting, the head teacher Maria walks effortlessly in high heels on the untarmacked roads of Zvizzchi. I am filled with admiration as I trudge alongside in my wellies. Everybody seems motivated: Arkadiy thrusts a spade into the earth as soon as he sets foot on the grass. He needs to get used to the location and we need to get used to the huge sacks of seeds that he has brought along.

Agreements are reached about the planting and there is a plan to organise talks and a communal meal on the ‘sowing day’ in mid-May. It pains me to think that I won’t be there. In May I’ll be back in Rotterdam, making drawings of the soil in Zvizzchi – because I have learned how the earth moved long ago and created this landscape. We walk with a geologist and some of the locals along the riverbank, hearing about the history of the river and find a few fossils from the Carbon Age. I find a 300,000,000-year-old mussel.

On 20 May the photos of the sowing day pour in. I see that the villagers are wearing summer clothes and some of them are levelling the field with rakes. I recognise all the school children, try to recall their names, practise the ten words of Russian that I now know and look forward to the end of June. Because that’s when I plan to return to eat the first lettuce, set up the shop, and plug the picture postcards that say “Greetings from Zvizzchi”.

"Growing up with salad is a good start", says Wapke Feenstra born in Wjelsryp, Hennaarderadeel, Netherlands, 13 July 1959. Who is Wapke Feenstra? She is a visual artist who lives and works in... Read more 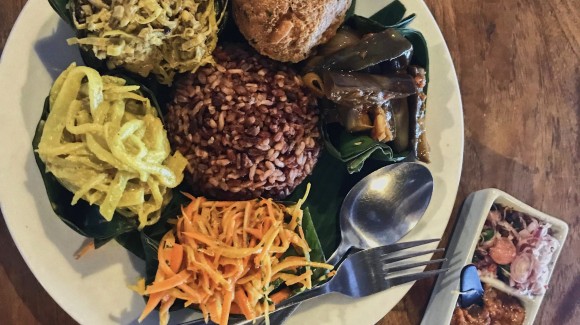 A vegetable discovery in Bali